Better regulation efforts in the EU

The opportunities for consultation are described in more detail on the European Commission website ‘Contribute to law-making’, which also contains a link to ‘Have your say’, a web page created by the European Commission to collect views on new EU policies and existing laws. It also contains a link to ‘Have your say: Simplify!’, a web page where citizens and businesses can suggest how to simplify and modernise existing EU legislation. To obtain advice and recommendations on better regulation and collect suggestions on better regulation, the European Commission has established an advisory group, the Fit for Future Platform, consisting of a stakeholder group and a group for member states. This platform replaces the former REFIT platform.

The EU’s evaluation system is made up of systematic evaluations of individual rules combined with more extensive fitness checks of several interrelated laws or policies. Legislative proposals often contain a clause regarding the monitoring of the regulatory framework. In its guidelines on better regulation, the European Commission has also included an ‘evaluate first’ principle before new regulations are proposed.

The better regulation efforts are manifested in various parts of the EU decision-making process, which is shown in the following image: 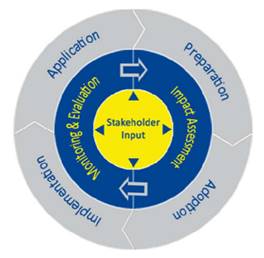 So far, the European Council has not made any impact assessments on its proposals for substantial amendments.

NNR has also compiled and submitted several proposals for improvements of EU legislation and the associated procedures to the Fit for Future platform, see Proposals for improvement and simplification of EU Legislation and VAT: align VAT rules with the aim and purposes of Union insolvency law. Jointly with its members, NNR also submits views on matters and legislative initiatives that are included in the platform’s annual work programme. These matters andlegislative initiatives are then subject to discussions and opinions of the platform.

The proposals are available from the following links:

Further information on the European Commission’s better regulation efforts, including the parts mentioned above, is available here.